It was several lifetimes ago
Or perhaps it was just yesterday
Time is unreal, flighty
You would be forgiven
For thinking she was floating
But the cloud was in her mind
Too many directions
Not a single destination
Still she kept walking
Seemed like in circles
But at no time she resisted
Her natural instinct to move
Though everywhere
Looked like nowhere
And at no time was there a reason
But onward and even backward
Almost blindly, hesitatingly

She was never deficient in imagination
And this room offered words
That melted, rhythm that lulled
Languages that danced on her tongue
Poets and mystics smile knowingly
Music flowed from her fingertips
And instead of looking upwards
She began to look inwards
A gratefulness that
She never stopped walking 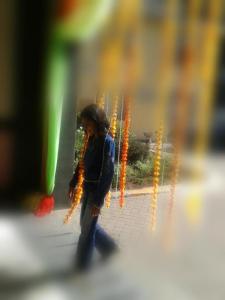 This was a photo I took of my daughter some time ago. I knew it would be used for a poem but I had no idea which one. When I saw this week’s Dungeon Prompts title Myth Making, this photo immediately came to mind. This was my journey into poetry and music. It has been 3 years :)